The two- and three-piece inflatable penile implant offers men a more natural erection than a semi-rigid implant. They are inflated using a pump when an erection is desired and then deflated easily and concealed in the penis. 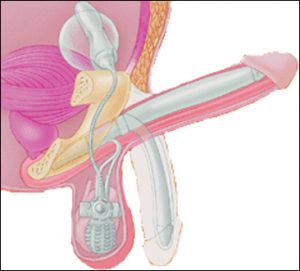 The most commonly placed implant in this practice is the three-piece inflatable penile implant (or IPP – Inflatable Penile Prosthesis). The two brands are the Titan Coloplast and the AMS penile implant, the CX and LGX (controlled expansion and length-girth expansion) models. This device includes a reservoir which is placed in the pelvis, two cylinders in each of the chambers of the penis, and a pump that shifts fluid between reservoir and cylinders. The pump has an inflate and a deflate button.

The three-piece inflatable penile prosthesis creates a firmer erection than its two-piece counterpart.  Fluid cycles between the reservoir and the cylinders via the middle-man, which is the pump.  The pump has an inflate bulb and a specific deflate button. These implants offer the most complete imitation of normal erections because it can fully inflate, and also fully deflate. The implant is completely concealed in the penis – no one will know it’s there (unless you tell them!).

When you are ready to have sex, you pump the fluid from the reservoir into the cylinders to create a rigid erection. After sex, you release the valve inside of the scrotum to drain the fluid back into the reservoir to return to flaccidity.

What is the Reservoir?

Generally, the reservoir comes in a small size and a large size. Dr. Kramer typically places the fluid reservoir in the Space of Retzius, or pelvic space. Some surgeons today are also placing them “ectopically,” which typically means in or above the muscle wall of the abdomen. Dr. Kramer has been successful in placing the reservoir deep in the pelvis without complication since 2005.

Dr. Kramer has to date never had a reservoir complication and does not use any sharp instruments in placing the reservoir. Additionally, a counter-incision or belt-line incision is only placed in about 1% of all cases, so it is generally placed through the scrotal incision. Dr. Kramer can place reservoirs safely and effectively, without a counter-incision, even in patients with bilateral hernias with mesh, kidney transplants, and radical prostatectomies. Given that, nearly anyone can be a candidate for a three-piece penile prosthesis and can do so without a counter-incision.

Cylinders are the part of the three-piece penile prosthesis that goes into the penis. The penis is like a double barrel shotgun and has two parallel erectile chambers. These cylinders fit into these chambers, known anatomically as the corpus cavernosa. The cylinders have the following choices:

The pump is fitted into the scrotum, into a sub-dartos pouch. The Titan has three available pumps:

The AMS has one available pump, the MS pump. It stands for “Momentary Squeeze”, and this is a one-touch release pump.